We Fight, We Win! Broad Based Coalition Opposes the Avalos Legislation. Keep critical funding for our Parks!

ORANGE – Action Alert! April 6, 2011 10am City Hall Help us tell City Hall, and our friends in the Labor Council “NOT JUST US!” We expect shared sacrifice. Please join the Recreation and Parks Department, The Arboretum Society, Tens of 1000’s of workers from the SEIU-UHW Healthcare Workers, The SEIU Local 87 Custodians, The SEIU Recreation & Parks Chapter, The San Francisco Building & Construction Trades Council, The Laborers and Gardeners of LiUNA!, Local 261, & The Northern California District Council of Laborers Community leaders from Plan C, the San Francisco Parks Trusr, & The Laborers’ Community & Training Foundation Business Leaders from the San Francisco Chamber of Commerce, Building Owners & Managers Association, Committee on Jobs, & the Golden Gate Restaurant Association, and thousands of individual supporters in our support of a reasonable fee for non-residents only! The Board of Supervisors should not negotiate away compensation and benefits of the workers during this severe economic crisis, and then turn around and fail to generate responsible revenue. Our Parks are worth it! Like last year (when the Board voted 8-3 for the important fee,) we still support a responsible fee structure for our beautiful facilities. (pictured: over 70 LiUNA! 261 members attended last year's hearing when the critical fee passed.)
Posted by Vince Courtney at 1:19 PM No comments: 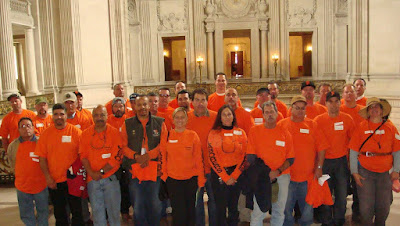 Dear Brothers & Sisters:
April 6, 2011, 10am
City Hall - Orange Action Alert!
"Shared Sacrifice...Not just sacrifice of the workers!"
Last year, many of you recall our effort to protect responsible revenue in the Department of Recreation and Parks. One particular item has drawn the aggression of an active vocal-minority of park advocates. That item is the continuation of the admission fee for non-City residents at the Botanical Garden.
While they have reached agreement with both Local 261 & SEIU on Community hiring practices for miscellaneous non-jurisdictional work (such as ticket-taking, etc.) and, have been major sponsors of our own Annual William Hammond Hall Event at RPD, the Society appears to be subjected to the brunt of most of the attacks, but I can attest that the General Manager (& even yours truly,) has been subjected vicious personal attacks related to the issue.
This may be only the tip of the iceberg as there in a move underway to by some of the same people to "landmark" the parks which will require gardeners to apply to City Hall in order to plant, and make small changes to the landscape. One of the benefits of a strong union membership, is that we do have the power to be heard and sometimes, that's all it takes! We must show up!
Last year, over 50 Union members showed up to City Hall to support the fee because we believe that it is unfair to TAKE ONLY FROM THE WORKERS INSTEAD OF SHARING THE PAIN OF THIS ECONOMIC CRISIS! We took a position last year because we were fresh off of a negotiation which saw our earnings take a 4.6% cut. We expect the Board of Supervisors to make tough decisions and to raise revenue where it can, instead of just taking from the workers through negotiations.
We revisited the position again this year because I met with the advocates of the other side who asked us to, and Supervisor John Avalos requested to meet with us. We heard both sides, and again, overwhelmingly support this modest fee because it is fair. It is simply wrong to take our money (they plan on taking more, see pension/healthcare,) so that they can look good politically by not even charging the non-tax payers to use our unique, world-class and not-so-inexpensive facilities. We know Supervisor John Avalos is a great friend of Local 261, and he respects our position, but we must agree to disagree.
Now, we must prevail! We must converge on City Hall on APRIL 6th, so that we have the greatest success at helping our Board of Supervisors make difficult, but necessary decisions, so our respective Departments generate much-needed revenue, and they don't keep taking from the workers through layoffs and compensation reductions. We are meeting now to increase revenue, not decrease it. In short, our reputation is riding on it! See you there!
Posted by Vince Courtney at 7:10 PM No comments:

2. Wage reduction equivalent to 36 hours pay, with 36 offsetting hours off; time off to be designated by management; wage reduction to be made during the pay period(s) in which time off occurs.

4. Maintain health supplement at present rate for the duration of this Agreement.

5. No layoffs or layoff notices through June 30.

6. For the duration of this agreement, no change from current practice re Spring break (March 25 through March 30 and April 1). March 31 (Cesar Chavez Day) is a paid holiday. This does not preclude management from assigning unpaid time off during Spring break, as provided in paragraph 2 above.

7. Add as a new third paragraph to Article II.F (Contracting Out):

The District will not assign work currently performed by employees under this agreement to district employees in other bargaining units.

City and Union are back at the Negotiations Table with the Public Employee Unions. relevant documents are On-line for members to review!

Meet and Confer over Pension and Health Care Reform
Background
On behalf of Mayor Edwin M. Lee and Supervisor Sean Elsbernd, the City is conducting meet and confer with its labor colleagues on a proposed Charter amendment to address the City's increasing pension and benefit costs.