Brothers & Sisters:
As many of you are aware, Brother Courtney was nominated earlier this month by Mayor Gavin Newsom to serve on the San Francisco Public Utilities Commission. This is particularly unique because Vince's appointment would be the 3rd major appointment (Brother Tom Harrison & Sister Theresa Foglio,) for Laborers' Local 261, since Mayor Newsom took office a little less than 7 years ago! I know this has everything to to with the strength, effectiveness, and commitment of the membership of our Union!
We all have reason to be encouraged by the fact that our Brothers & Sisters in the Building & Construction industry would have representation on this important Board if Vince is confirmed, and we should also be proud of the fact that we have received strong support from the Northern California District Council of Laborers, the SF Labor Council, the Alliance for Jobs & Sustainable Growth, Unite-Here Local 2, the A. Philip Randolf Institute, Brightline Defense, the Chairman of the SF Democratic Party and many others.
This is an excellent opportunity for both Brother Courtney and our Union because we know Vince has been assisting LiUNA! Vice President Oscar De La Torre in both the public and private sectors throughout Northern California, while the SFPUC's private sector construction plans result in job opportunities for our members in Local Unions 261, 270, 304, 389, 324, 67, 185, and 1130 which Brother De La Torre represents...its a great fit for the 35,000 members that count on our Union in Northern California.
Because Brother Courtney is respected by Business, Labor, and the Community alike, and because he is highly ethical, extremely dedicated & effective, and most importantly, OUR BROTHER, I encourage you all to appear at the Rules Committee meeting at City Hall Monday January 3 at 10am, to show unity while Vince is interviewed.
Please also be prepared to attend the swearing in ceremony following the full Board of Supervisors meeting on Tuesday, if everything goes smoothly and Mayor Newsom decides to schedule such a ceremony. Naturally, all 3000 members of Local 261 are invited to attend, so Orange Up!
Fraternally,
Brother Ramon Hernandez 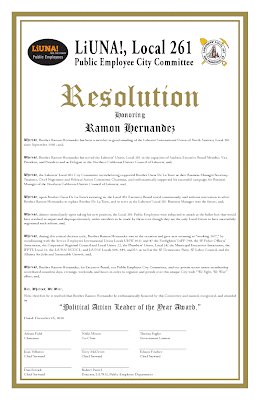 Posted by Vince Courtney at 12:09 AM No comments: