Brothers & Sisters:
Congratulations on negotiating and ratifying an acceptable alternative to the layoff/rehire scenario! Special thanks to the Chief Stewards and Department representatives who worked long hours to get the job done. From the Mayor's Office on down to the SF DHR, everyone worked toward this end. Keep in mind that it is critical to stay together and always move with one strong voice as we continue to confront challenges that are before us.
Posted by 261 City Committee Admin at 6:35 PM No comments:

This afternoon, the Local 261 City Committee and Business Manager Ramon Hernandez concluded months, weeks, days, and hours of negotiations with the City to come up with an alternative to the layoff/rehire scenario which would have resulted the vast majority of Union membership being reclassified as part-time workers at 37.5 hours a week to start. The 261 negotiators took part in many of the discussion with the PEC (central table) which was chaired by Bob Muscat and Tim Paulson. The 261 team also worked closely with the SF Building Trades Council and Larry Mazzola of UA 38. Most of the items agreed to in those sessions have been incorporated into the LiUNA! Local 261 agreement with the City.
The Local 261 Committee had a number of items that were specific to the bargaining unit, and as such had several sessions with the City to address those concerns as well. In the end, the team unanimously agreed that it had the best possible alternative agreement (see it on the right of this page,) to the layoff/rehire scenario available.
In addition to those named above, the Union greatly appreciates all of the work that City representatives Mary Hao, Ileana Samanc, Vitus Leung, have done for the City the past several months and all the others who were committed to the process and professionalism.
Finally, without Negotiators/City Committee members Adrian Field (Chair,) Nikki Mixon (Co-Chair, ) Terry McDevitt, Joan Vellutini, Dan Feerick, Edison Fincher, Zac Salem, Larry Montoya, Alex Alvarez, Jose De La Mora, Manuel Bustos, and Theresa Foglio we may have not had such a fair agreement for the membership to ratify tomorrow as an alternative to the layoffs.
Voting is at 10am Tuesday, April 27 (juice & 200 donuts,) City Committee meeting is at 12 (10 pizzas) and voting will close at 5pm (6 more pizzas at 2:00.) See you there, results at 6 on twitter.com/vincecourtney
Posted by 261 City Committee Admin at 8:48 PM No comments:

LiUNA! Local 261 Today. City Committee members including Chairs Nikki Mixon and Terry McDevitt reached tentative agreements with the city this afternoon on significant economic items. Although the parties have not concluded all discussions related to an agreement which is likely to go until July 2013, the parties are very close to finalizing on items such as "seniority," "weather," "special" assignments," among other things.
"It has been a very long road for our team. Without committed members like the Brothers & Sisters we have at the table now, we have very little hope of convincing our public sector membership that the tentative agreement reflects the best effort any labor organization could make. I believe that the dedication of our City Committee negotiators is unmatched City-wide." Ramon Hernandez, LiUNA!, Local 261 Business Manager
The next session is set for City Hall on Monday 1-3pm. The Ratification Vote will be held at the Laborers' Union Hall the following day between 10-5pm. Election results to be announced via http://twitter.com/vincecourtney
Posted by 261 City Committee Admin at 5:25 PM No comments:

Today, the City and the Local 261 Negotiations team met for several hours to discuss non-economic items as well as the actual mechanism for taking days off if the membership were to ratify the tentative agreement. Notices will go out next week and it is the Union's current position that employees treat them as real and act accordingly because there is always the possibility that he membership will not vote for the tentative agreement, so protect yourself by taking these notices seriously. This has been a terribly frustrating time for all involved. The Mayor has always said the the "part time" 37.5 hr/week was a proposal to close the budget gap and that it was up to the Union to come up with an alternative. Here, at Local 261 we have and we are almost ready to sign, seal, and deliver it to the membership. Adrian, Nikki, Joan, Terry, Theresa, Dan, Edison, Larry, Jose, Alex, Manny, and Zac have represented us well. We are on our way. If other Unions fail to ratify that will be their concern. In the end there will be no question that the Committee put forth the best effort to secure the best possible alternative to the "part time scenario." Keep posted!
Posted by Vince Courtney at 6:25 PM No comments: 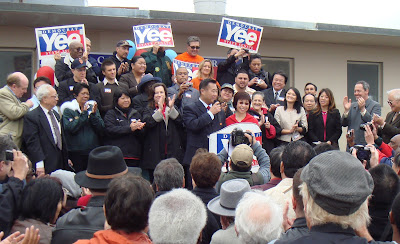 The City negotiations have stalled with other bargaining units. The situation has made it necessary for the Monday session which was set for 2:30pm at City Hall to be moved to Thursday at 9:30am. Since we had hoped to move for a membership ratification vote on Thursday and we will be still at the bargaining table the same day, the new tentative ratification date for membership to vote on the alternative to the 37.5 "part time" work week is now April 27, 2010 at the Union Hall. Please do not be discouraged by the scheduling change as the parties are very close to an agreement especially as it relates to furlough days.
Also, earlier today State Senator Leland Yee, a friend of the Laborers for years, kicked off his Re-Election campaign in the Sunset District (pics.) Thank you Brothers Bruce Ricci & Dan Feerick, and Sister Theresa Foglio, the 261 E-Board and others for turning out for the event and precinct walk.
Posted by Vince Courtney at 11:06 PM No comments: 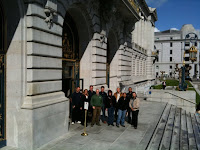 The Laborers' Local 261 City Committee negotiators will be back at the Table on Thursday morning for a scheduled 3 hour session with City Representatives. The goal is to finalize and tentatively agree to matters such as medically single employees and the City Plan, "lead" pay application, inclement weather, privatization models, departmental reorganizations/accountability, uniforms, seniority (shift bids,) supervisory opportunities, Horticultural standards through apprenticeship, Continuing Education, Camp Mather, and alternate work programs, among other things as well as to engage in a thoughtful discussion resolution surrounding the impact on the bargaining unit of 12 furlough days given the membership's overwhelming determination last negotiations that funding the retiree healthcare was a joint responsibility. It is our great hope that we will present the best possible tentative agreement for the members to ratify (as opposed to the "part time" layoff/rehire scenario,) that the members can adopt through a VOTE on April 15, 2010 at the Laborers' Union Hall! Remember to follow http://twitter.com/vincecourtneyfor updates and possible changes.
Posted by Vince Courtney at 2:24 PM No comments: