City to move forward! Local 261 to meet with City Wednesday with counter.

City Moves to Implement 37.5 Hour Workweek Proposal – Local 21 Responds
In a move that signals the severity of the budget crisis but is also certain to embroil the City in an expensive and time-consuming legal battle, the City has announced that it plans to issue layoff notices to between 10,000 and 15,000 employees this Friday, March 5. The layoff notices are being issued a mere 15 days after the City sent letters to Local 21 and other city employee representatives requesting that they “Meet and Confer” on the proposal.
From IFPTE Local 21
Posted by Vince Courtney at 2:57 PM No comments:

Even in San Francisco, a union town where labor issues are treated with kid gloves, politicians and transit riders are teeing off on the drivers like they stole rent money from little old ladies.
"There is no question in my mind that they (the Union) completely misread the public," Mayor Gavin Newsom said Wednesday. "Either they step up or the people of San Francisco will."
Posted by Vince Courtney at 3:48 PM No comments: 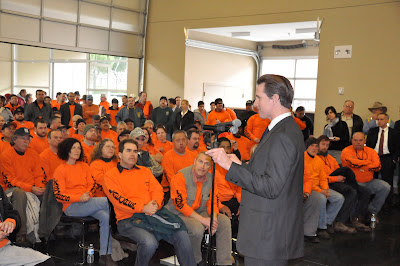 San Francisco: This afternoon, before almost 400 working men and women Mayor Gavin Newsom advocated for a plan to defer construction fees in order to fast track construction projects and assist Local Unions with their increasing out of work lists. The event was coordinated between the SF Building Trades Council and the Laborers' Union, Local 261.
(read the Mayor's press release)
Following the discussion, LiUNA!, Local 261 City Committee members met for sometime to discuss the budget and alternatives to the 37.5/hr work week. All Chief Stewards presented and there was in-depth discussion on every issue currently being discussed.
Following a presentation from the Mayor's office (a powerpoint illustrating the 522 million dollar deficit,) many members stepped up to the mic and let the Brothers and Sisters know what was on their mind.
Most agreed that the crisis was for real and, furthermore, that it would be proper to meet with the City and propose "opening" to counter the current proposal. It was also decided after some discussion, that there would be some potential economic movement by the Union related to collective efforts at reaching resolution moving forward.
Posted by Vince Courtney at 11:30 PM No comments:

Local 261 Chief Stewards and City Committee meet at 12pm Wednesday at Local 261 to come up with alternatives to the City's 37.5 hour proposal. 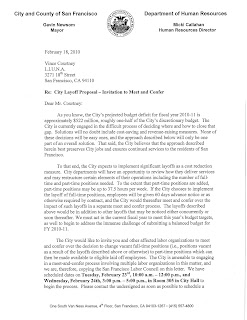 Brothers & Sisters:
When we read in the newspaper here that
The mayor has the authority under the city charter to reduce workweeks after consulting with union leaders, and the plan doesn't need approval from the Board of Supervisors. Layoffs, though largely a formality, would be required because 40-hour workweeks are inscribed in union contracts with the city.
while its always debatable, we had to consider that the meetings which would be taking place would be done so pursuant to the state labor code (ie. meet & confer,) rather than via the normal collective bargaining process. (Note: contract changes require ratification while, "meet & confer" is simply an obligation the employer has to its employees prior to making such changes.)
When "labor officials" from all affected unions (Vince Courtney, Adrian Field, Theresa Foglio, and Nikki Mixon for 261,) met with the Mayor at City hall that same afternoon, the Mayor indicated that the 37.5 hr work week was a "possible proposal," (we have since learned through the very public discussion of the issue related to the deficit that it is an overwhelmingly popular position with the citizens of San Francisco.)
While the Newsom administration has always indicated a willingness to talk with representatives of Local 261, we have been meeting regularly along with the SF Labor Council Public Employee Coalition on the issue (see powerpoint related to City's $522,200,000 deficit,) because it is City-wide problem and likely requires a city-wide solution.
Last week, the layoff/37.5hr work week became an official proposal across the board. Upon receiving the notice from Martin Gran, the coalition met again. It was decided by the coalition there that there would be no occasion to meet this Tuesday or Wednesday. By law, we must deal with the City in "good faith," therefore, on behalf of Local 261 we sent the following to Martin Gran:
While we have been participating in the "coalition" discussions, our Committee (Local 261 only,) believes that it is appropriate now to indicate our willingness to meet and "begin the process."
I have a scheduled City Committee meeting set for 12pm 2/24, which is open to all members and has already been announced in advancehttp://local261.blogspot.com and by flyers throughout the City.
The Union's Public Employee Comittee has decided that they will work together at this meeting to come up with any and all alternatives to the massive layoff/37.5 hr work-week proposal with great hope that one will be ultimately acceptable for purposes our current budget situation.
Because of the meeting date, Tuesday is out and Wednesday as well. Can we set another date sooner, rather than later for such a discussion?
It is critical for us now, through our internal City Committee process to determine together our best course. Many unofficial proposals have already been forwarded to the Local Union. The meeting is intended to bring about proposals for a solution (not to get something off our chest!) Please prepare by asking yourself;
1. Do we accept as factual the 522 million dollar deficit? (see above)
2. What are alternatives that are of similar value? (days off, holidays, straight reductions, etc)
3. Would we be better off proposing to open the contract in order to get better standing on various issues?
By Wednesday afternoon, we will put the proposals up on the Board and will work diligently, transparently, and openly throughout this entire and difficult process.
Posted by Vince Courtney at 9:34 AM No comments:

City Committee Prepares for meeting like the one we had way back in the day at the Plumbers' Hall with Willie Brown. This is for Real!

SF City Hall/February 9, 2010
This morning many city workers had to read in the newspapers that the financial condition of the City was deteriorating. This afternoon, the Mayor's Office presented to all of Labor (For us: Adrian Field - RPD 3422, Nikki Mixon - DPW C3417, Theresa Foglio - DPW 7514, and Vince Courtney L261) the projected figures for Fiscal 2010/11 here ! The document shows nothing less than dire news. The group discussed the pending pension reform measures for the November ballot, the SF Firefighters' willingness to contribute 9.0% into the pension, the fact that most the Building Trades Unions are in contract negotiations, the 1.2 billion dollar "discretionary fund" as it relates to the projected $522,200,000 shortfall, the doubling of the unemployment in SF from 2008, and the very, very difficult times ahead.
The story:
40 hours Current workweek for most city employees
37.5 hours New proposed workweek
$50 million Estimated savings per year
26,000 Approximate number of full-time city employees
$522 million Estimated 2010-11 budget deficit
$6.6 billion Approximate size of city budget
Given the overwhelming negative response from membership to the article in the Chronicle related to the massive layoff and the 37.5/hr week, the City Committee will be studying, investigating, and evaluating potential options (read "give backs") over and above the Departments' own 20% cross-the-board cuts already in motion. Unless and until a "state of emergency" is declared, the membership will always vote on contract changes.

Of particular concern may be the overwhelming negative public opinion of our plight. Here is the most popular citizen comment (of over 500 to the article.) We need ideas and positive stories about our service to the city and our meaningful work.
"26 THOUSAND city employees? Amazing. What the heck do all these people get paid to do? How about laying them ALL off and hire back about one-third of them and make them actually work? A novel concept, I know."
Recommend:(1159) Disagree:(374)
Please check the meeting schedule and be prepared to come up with ideas (the City has a figure of 50,000,000 it would save in the 37.5/hr work week were implemented.) This is for real, there will be an agenda, nobody will be saying what we want to hear, just the facts.
Posted by 261 City Committee Admin at 11:13 PM No comments:

San Francisco, City Hall:
Today, before the Budget and Finance Committee of the SF Board of Supervisors, the Department of Public Works through its Director Ed Reiskin and, the Recreation and Parks Department through General Manger Phil Ginsburg, presented ideas to the three member group to jump-start the season's budget discussions.
Of particular interest to Local 261 and its many partners throughout the City, was a developing discussion related to California State certified Horticultural Apprenticeship that would not replace existing workers, but rather would elevate the professional standards of the Gardening staff as a whole, create real career opportunities for local residents, and through the City College coursework and the joint administration save money for each Department in dire economic times. "A win, win, win, that started at our own Laborers' Public Employee City Committee level," stated Local 261 member John Raulli during his comments at the meeting. Union members can continue to get up to date information on the progress of the program and other matters affecting the unit related to the budget process at the next City Committee meeting. Adrian Field, Theresa Foglio, Nikki Mixon, Mark Roumbanis, John Raulli, and Apprenticeship Chair Joan Vellutini will continue the sustained effort through adoption.